USe code - FIRSTBUY10 & GET 10% OFF ON YOUR FIRST PURCHASE. free shipping on domestic orders above Inr5000

Parama Ghosh’s eponymous label has acutely influenced quintessential Bengali styling, be it with the fun cheeky Mahalaya blouses or Howrah bridge saris. This designer’s newest Puja lineup explores some age-old and familiar nuances of homegrown traditions. Parama’s Abhoran series, which has been acquiring a lot of attention on social media, basically recalls the intricate design language of Ma Durga’s elaborate jewellery and adornments in the form of hand-made embroidery. 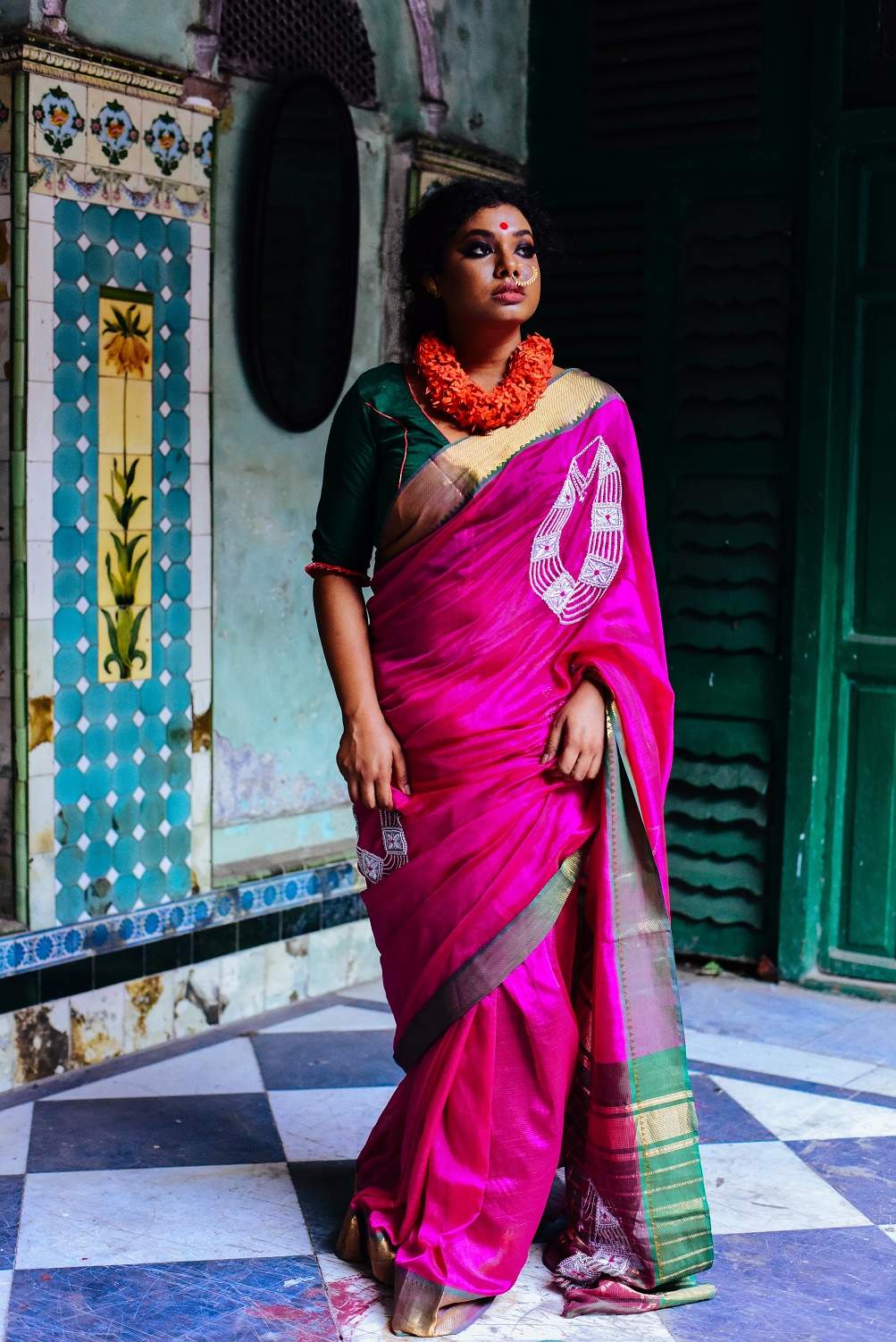 “The global crisis has done away with the idea of theme pujas, and people are now going back to how things used to be and how pujas were traditionally celebrated. The Abhoran lineup reflects this sentiment. Abhoran basically refers to the goddess’s jewellery, and we’ve showcased these embellishments with threadwork detailing and zardosi work on mangalgiri silks, the designs are very old school and traditional, these are the kind of adornments we’ve grown up seeing on Durga,” Parama tells us. We caught up with the designer to explore her line further:

You’ve introduced a festive edit for kids too this year

Yes, and it’s been doing unbelievably well, we’ve experienced a deluge of demands. So the edit is called Anondo and was conceived along the same lines as all of my line-ups, we have classic Calcutta dhutis for boys with the Howrah Bridge on them and then we’ve lokkhi meye dresses, it features a mother combing her daughter’s hair.

The idea is of course to explore the parallel between the goddess lakshmi and durga and any other mother and daughter. Then we have these Kamakhya dresses with the red alta-coloured feet of the goddess. We have also come up with matching blouses for adults, so kids can twin with the grown-ups be it their mums or aunts or sisters.

Tell us about the Abhoran lineup

The pieces in the Abhoran series feature embroidery, brocade detailing and zardosi work  which resemble the goddess’s silver jewellery and the elaborate adornments we see in bonedi pujo. So we have hand-embroidered the Daaker Saajer mukut on the saris and then there’s intricate detailing made with zari, thread and pearls, it is meant to appear exactly as a real necklace. In some of the pieces we’ve recreated the Chalchitra design on the sleeves of the blouses, which looks like hand-embroidered jewellery on a gawrod sari.

How has the Covid crisis affected your business?

To be honest I did not suffer any losses because we already sell online and I have an offline presence right now at the CIMA Art & Life exhibit where people can shop my pieces. Yes, the travelling exhibits we usually do during this season in Mumbai, Delhi or other cities did not happen this year because of obvious reasons. But people are now really keen on shopping online. Yes, the crisis has been quite terrible, but things are picking up I would say, even for artisans. My kantha batik unit in Shantiniketan, for instance, has around 75 women from rural areas who work with my designs and they have been working all through this period. So things are getting better.

Have you noticed a change in buying patterns, especially in festive shopping?

Yes, people want to shop more diligently now and make smart decisions while they’re shopping. So they are going for pieces which are going to last a long time, there’s a renewed interest in versatile pieces which make for valid investments and customers are thinking along those lines now.

Special: CIMA's Art in Life celebrates sustainable fashion in the times of pandemic

Choose your wishlist to be added

We will notify you on events like Low stock, Restock, Price drop or general reminder so that you don’t miss the deal

Are you sure you want to delete the wishlist?